Welcome to another edition of Backlist Revival Project, where the spotlight is on Filipino-authored books released before 2015. For this round, I’m featuring Kate Sebastian’s Old Enemies Make the Best Lovers. 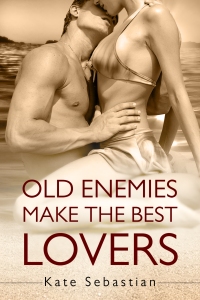 Christy Martinez may have been a nerd and the number one victim for the mean girls in her high school, but she’s since grown up, gone to college, and carved out a successful career for herself. Now in her late 20s, she’s put high school behind her, only to be blindsided by a blast from her past.

She and her friends have planned a much-needed vacation, but she finds out at the last minute that they’ll be joined by uber rich and gorgeous Kyle Quinto. He just happens to be the guy who played a cruel trick on her in high school, breaking her heart and making her a target for bullying in the process.

Can Christy forgive and forget? Because Kyle is a whole lot of hot.

Get to know Kate Sebastian’s dream cast (she has two sets!) and listen to her book playlist by clicking on the Read More button below!

Kate Sebastian: I don’t really think about mood music or dream casts when writing a novel, so putting one together two years after I first published Old Enemies Make the Best Lovers was a heck of a challenge, as it required me to return to a head space I haven’t been in for a long time. But here goes nothing!

Kate Sebastian: I’ll admit I don’t watch a lot of screen, especially Philippine TV or cinema, but I did media work for a while, and when I did, I got to learn about some of the players in the biz. So going by vibe alone, I’m casting the following:
Luis Manzano as Kyle
My reason is enviro-nerdy, though: he’s been a diver for a long time, plus he’s an ambassador for WWF-Philippines!
Bea Alonzo as Christy
She’s sooo pretty and when I had the chance to meet her, she was super nice and unaffected. She’s got a fun, natural vibe I think would work for Christy.
Sam Milby as Victor
Met him once in real life, and he was super sweet! Fortunately, I saw photos of his abs after I met him, otherwise I would’ve had a hard time focusing.
Carla Abellana as Tracy
She just seems cheerful and quirky, and from what I’ve seen, she’d probably be aces at handling the emotional roller coaster ride that is Tracy.
Karylle as Serena
Not only because she’d be a great big sister, but also because she’s got style.

Kate Sebastian: Mostly because I’m way more familiar with these actors. I cast all Hispanic/Latino actors because Kyle and Christy both have Spanish family names, and while I didn’t specify family names from Victor and Tracy, I did start working on their story (it just needs a lot of fixing up), and I would say this still fits.
Rodrigo Santoro as Kyle
Not just because I’d like to see him emerge out of the surf, but because I liked the sweetness he brought to his character in Love Actually. And while I try not to think of his role in 300, Xerxes had some mad golden abs.
Gina Rodriguez as Christy
I don’t watch a lot of the CW’s Jane the Virgin, but when I do come across it, I am just captivated by Gina Rodriguez. I feel like she’d be good at bringing out Christy’s quieter yet adventurous nature.
Adam Rodriguez as Victor
Most of my friends know him from Magic Mike but I always think of him as Eric/Delko in CSI: Miami—protective and authoritative when need be, but sweet and considerate by default.
Jaina Lee Ortiz as Tracy
I really enjoyed Fox’s Rosewood, and I feel like with as much fire as she brought to the role of Detective Analise Villa, Jaina Lee Ortiz should be able to ride Tracy’s emotional roller coaster with pizzazz.
Marisa Ramirez as Serena
This actress is my favorite in CBS’s Blue Bloods! In the show, she’s sweet yet isn’t afraid to call people out on hard truths, and she’s got her own sense of style. Plus, she’s gorgeous!

Kate Sebastian: At the end of my book, I shared my four-song playlist for writing this story: “Redemption Song” by Bob Marley & the Wailers, “Zombie” by the Cranberries, “Get Lucky” by Daft Punk featuring Pharrell Williams and Nile Rodgers, and “Timber” by Pitbull featuring Ke$ha. But this was mostly to get my blood pumping to beat the deadline for submitting my drafts. For this book’s mood music, I’d probably go with the ones below. Fair warning, though—the songs are a mix of ’90s pop, country, and reggae, with a couple exceptions!
1. “Invisible Man” (98 Degrees)
This song perfectly represents Kyle’s feelings for Christy back in high school, if she only knew it! She was totally clueless about how aware he was of her back in the day.
2. “Impulsive” (Wilson Phillips)This crazy tune is great for showing how Christy must’ve felt right up until that moment things came crashing down at the prom. And, yes, it’s a non-“Hold On” Wilson Phillips song. I was obsessed with this girl band when I was in grade school.

3. “Bye Bye Bye” (‘NSync)
Their feelings after the “Prom Poser” incident must’ve been filled with the bitterness of disappointment. This was a huge misunderstanding, and they both left feeling like the other had done them wrong, which is kind of what this song is about.

4. “Stronger” (Kelly Clarkson)
I didn’t explore Christy’s history of being bullied quite as much as I should have, but I feel like her finding Tracy, learning to stand on her own and let herself be awesome, is a big part of who she is as a character. And what better song to portray this than Kelly Clarkson’s hit “Stronger”?

5. “Hate (I Really Don’t Like You)” (Plain White T’s)
How Christy feels about Kyle when they meet again after over a decade.

7. “Baby I Love Your Way” (Big Mountain)
It’s their love of ocean adventures that brings Kyle and Christy together, and how can we have a beachy romance without a little reggae? This Big Mountain hit is a classic, and helps to show the way the couple mellows toward one another.

8. “I Can See Clearly Now” (Jimmy Cliff)
Mood music for the aftermath of that big reveal, of course! And because I loved, loved, loved the movie Cool Runnings.

9. “Domino” (Jessie J, acoustic version performed in France)
I just love this song, and while the original version reflects the breathlessness of a steamy night like the one Kyle and Christy share, I like to think that parts of it were stripped down and languid like this version of the song.

10. “Dibs” (Kelsea Ballerini)
This has been a consistent earworm for me over the past month or so, and I think it’s perfect mood music for how I left Christy and Kyle at the end of the book; it’s got that light-hearted feel, but also the promise of something more. Kate Sebastian has been crafting stories since she was tiny. She spent her childhood reimagining classic fairy tales and inventing new ones, then having her dolls and stuffed toys reenact them in elaborate sets she built by rearranging the furniture in her house.

She earns a good living as a writer, editor, and online content admin but decided to try her hand at writing romance since she reads so much of it.